Should You Sell Your Stocks During a Recession?

The possibility of a recession is certainly higher than usual. Higher rates, inflation, supply chain issues, Ukraine, etc. could all be factors to a slowing economy.

The point where an economy officially falls into a recession depends on a variety of factors. The most popular rule of thumb is two consecutive quarters of a decline in GDP. However, the NBER has its own definition of what constitutes a recession…

Regardless of which definition you choose to follow, a recession is a decline in economic activity. They are a normal, but unpleasant, part of the business cycle. We’re always heading toward a recession, we just have no idea when it’ll begin

Unlike the stock market, economic data is not updated daily. It’s possible we could be in a recession right now, but it hasn’t been officially announced.

While inflation has been running hot, consumers and businesses are in an unusually strong financial position and it has enabled them to pay the higher prices.

Regardless, it seems the consensus is that a recession is coming. How mild or serve it might be is still unknown. And recently the stock market has started to price that in. The S&P 500 index is down -22% from its all-time highs. The downturn will inevitably lead to some investors making changes to their portfolio.

Should You Sell Your Stocks?
Recessions have caused the majority of the largest stock market downturns so it’s understandable that investors are nervous.

Historical comparison can’t tell us exactly what will happen, but they can help put things in perspective. Here’s how the S&P 500 performed before, during and after past recessions: 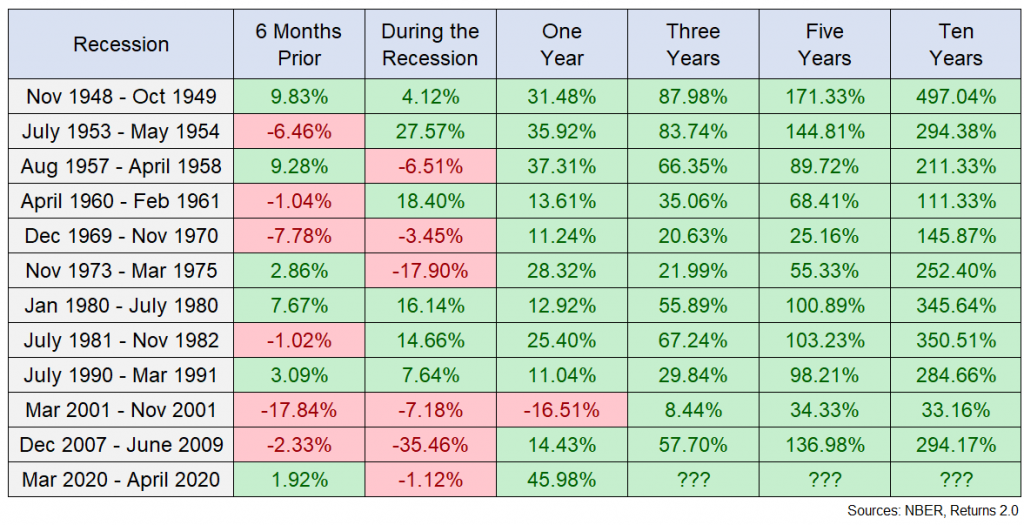 The average five-year return following a recession is 93%. The longer you stay invested, the less likely you are to lose money. Investors who put money to work during recession have done well over time.

Unfortunately, it’s hard to predict how mild or severe the next recession could be. The average stock market decline during a recession is -31%.

But even if you know the exact start and end date of the next recession, it’s highly unlikely that you’ll be able to time the market. Economic data is a lagging indicator, while the stock market is a forward-looking indicator.

For instance, the last major recession ended in June of 2009. The market had railed 40% off the lows before the recession was officially declared to be over.

With that being said, the stock market could certainly fall further. But at the end of the day, you need to have your own house in order. Recession or not, you should continue to save for your emergency fund, pay off high interest debt, and invest for the long term.

If there’s any silver lining, it’s that recessions do not last forever.

Stock market represented by the S&P 500 index. Down 22% as of 6/14/22. Source YCharts.
Data is on recessions going back to 1948.
Consumer Checkpoint from Bank of America
US set for recession next year, economists predict from Financial Times
Employers Added 390,000 Jobs in May: Unemployment Steady at 3.6 from Wall Street Journal
Consumer Debt to Service Ratio from FRED
Recession return chart from Ben Carlson
US Business Cycle Expansions and Contractions from NBER

Stock investing includes risks, including fluctuating prices and loss or principal. This information is not intended to provide specific advice or recommendations about any stock nor is it intended to be a recommendation to buy, sell or hold any stock investment. We suggest speaking with your financial professional about your situation prior to investing.

Please consult your financial advisor regarding your specific situation. The opinions voiced in this material are for general information only and are not intended to provide specific advice or recommendations for any individual. All performance referenced is historical and is no guarantee of future results. All indices are unmanaged and may not be invested into directly. All investing involves risk including loss of principal. No strategy ensures success or protects against loss. This information is not intended to be a substitute for specific individualized tax advice. The Standard & Poor’s Index is a capitalization weighted index of 500 stocks designed to measure performance of the broad domestic economy through changes in the aggregate market value of 500 stocks representing all major industries.