What is going on with Tesla?

What is going on with Tesla?
A year ago, Tesla traded at 225 and the company’s CEO, Elon Musk, was under constant scrutiny from the public and short sellers. Now, Tesla trades at over 2,000 per share!

Valuation
Tesla passed Walmart as the 9th largest stock in the United States with a market cap of $374 billion. 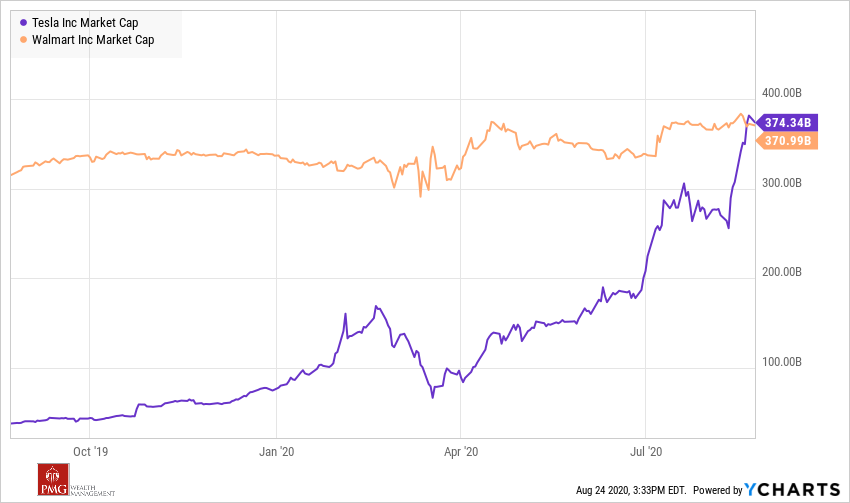 Not only does Tesla have a higher market cap than Walmart, it’s market cap is higher than the combined market value of Ford, GM, Fiat Chrysler, Daimler, Ferrari, Honda, BMW, and Volkswagen.

Elon Musk
Elon’s first big win was when eBay acquired PayPal for $1.5 billion stock, Musk received $165 million from that deal. Since then he has invested in SpaceX, Tesla, Hyperloop, The Boring Company and more.

During this time, Elon has amassed a huge following on Twitter. His tweets have moved Tesla’s stock up and down 10% on multiple occasions. Is that legal? No, the SEC has fined him the past for his actions on Twitter. Below are a couple examples of his stock moving tweets. (IMO= in my opinion)

Why has the stock gone up?
Investing in the future growth
There are not many companies as innovative as Tesla. When you invest in Tesla you are paying a premium in hopes of future growth and innovation. This is one of the reasons Tesla is a risky investment.

Stock Split
Tesla’s stock split allows investors to buy it who may not have been able to afford a 2,000 per share. When stocks split there is no change to the overall value of the company-just the price of its shares. In Tesla’s case, if you own 1 share before the split you will now own 5 at a lower price.

S&P 500 inclusion
Tesla has now qualified for S&P 500 inclusion. If they decide to add it the index, mutual funds and ETFs that track the S&P 500 index would have to buy Tesla shares. It’s common for stocks to be added or removed to the S&P 500 but what is uncommon is a company of Tesla’s size to join. At its current valuation it would be the 9th largest company. The larger the valuation of a stock, the more mutual fund and ETFs need to own of the stock.

Any company names noted herein are for educational purposes only and not an indication of trading intent or a solicitation of their products or services. LPL Financial doesn’t provide research on individual equities.

Past performance is no guarantee of future results. This content is for informational purposes only and not a recommendation to buy or sell a specific security.

The opinions voiced in this material are for general information only and are not intended to provide specific advice or recommendations for any individual. All performance referenced is historical and is no guarantee of future results. All indices are unmanaged and may not be invested into directly. All investing involves risk including loss of principal. No strategy ensures success or protects against loss.